Jason from PMD Games wanted to write a post about how their current KS game, The Ginger Wars, came to being. I would like to extend a huge thank you to Jason for taking the time to write about their game and sharing their design process with us. If something about the theme or one of the mechanics appeals to you, please follow the link campaign link at the bottom of the article to check out their campaign. Without further ado, here is Jason.

Jason is the co-creator and designer of The Ginger Wars card game, which is now live on Kickstarter.

As someone who loves the creative process I seek out projects in my spare time. I find a creative project goal and a blank page exciting for a number of reasons. Creative projects are an opportunity to learn something new and improve on a vast skill set. Those skill include design, creative thinking, copywriting, execution and all the other skills involved in project management. It’s also extremely rewarding to finish a project that other people enjoy or find inspiring. I wanted a big creative project and decided to team up with my tabletop game obsessive friend, Brent.

We created a card game called The Ginger Wars, our second stab at creating a tabletop game. We spent 5-6 months developing a museum heist game. While it was fun, we found it became a bit too complex to fully balance it, so we shelved it for another time. This brings us back to our subject of the day, The Ginger Wars.

Our goal was to create a game for the casuals gamers. A game that anyone could play to get their game nights started and wasn’t going to scare off those new to the table. We also wanted a theme that everyone could get behind. We settled on battling gingerbread people and we were off to the races. We thought it was a theme everyone could smile at and maybe feel some nostalgia. After brainstorming and picking the theme, we started working on the guts of the game.

We liked the idea of a game that played similar to war. Our reasoning was to keep the gameplay moving quickly and war mechanics are already understood by most people so getting into this game would be really easy. For the goal, we tried giving players a character with 5 lives they had to protect before getting knocked out. The problem with this goal was once players were knocked out, they had nothing to do before the next game. Our friends sometimes go off and do other things when they get knocked out of a game. We wanted to avoid this so we changed the goal to collect 5 different character pieces from your opponents. Everyone is involved in the game right up until the end.

Developing the rules and mechanics of our game took many, many months of playtesting to get them right. We used playing cards and handwritten cardboard chits to test our game. Whenever we thought the game didn’t flow right we would stop and talk about why that was. A game might not flow well for various reasons. It could be because there is no decision making going on and the game is effectively playing itself. It could be lack of game involvement between turns. It could be simply the game isn’t fun. Once the game flowed well with our scraps of paper we knew we could move on.

Next we tried to break the game. Like a glitch in a video game, it will just ruin the fun if they are present. We tried various one-sided strategies people might come up with to win. One thing we found was ganging up on someone was a possibility. We got around this by adding and tweaking a few mechanics.

The next step was to get a lot of other people to play our game. Playtesting is key to building a game. Our motto about testing is always “more the better.” I created decent looking prototypes for this part of the game’s development. We started with our friends and family. We wanted to be present during these playtests to explain rules, mechanics and answer any questions. After each playtest we collected feedback and updated our rules when necessary. Next was the real test, blind playtests. It’s a great sign if a blind playtester can understand your rule booklet and get the game going without your help. We collected feedback from various groups and tweaked our rules until we were certain our game worked well and people had fun with it. Hearing that a group had a great time playing your game was pretty rewarding.

The last thing we did was add something to make our game special. We added an eliminator match variant where players would use real edible gingerbread people for their characters. Not only can they win a character piece, they can eat it! Taking your friends last piece to win the game and eating it in front of them is the best.

Baking & Gaming with The Ginger Wars 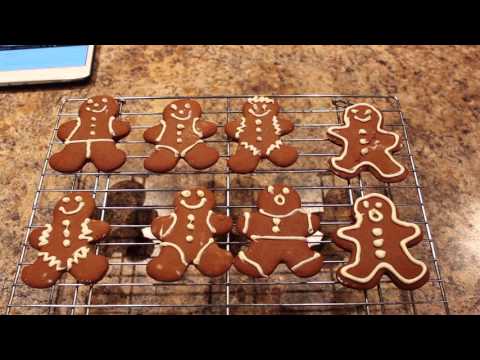 Our Kickstarter for The Ginger Wars is now live. Please check it out and support us. You can reach me and Brent at pmdboardgames@gmail.com or on Twitter: @PMDGames